Now we won’t say that we nailed our week 2 prediction, but we could have done worse. We had 1 of the 3 movements that came out, so we have that going for us! We saw another long pacing workout, with 20 minutes of dumbbell thrusters, toes to bar, and double unders.

Once again, we had some AWESOME performances this week, with some notable ones listed below:

What to expect this week:

As with every open, to guess what’s coming next is like trying to predict the weather in our great State. However, we can guarantee that the carnage will continue, and the skills will become more advanced, and the scaled division will be absolutely CUT THROAT. Be sure to tune into games.crossfit.com at 8PM or to Wodify at 8:15ish to see what’s in store for this upcoming Friday. Just like every weatherman/woman in town, we will make a predication: Handstands, box jumps, and lunges. And just like every weatherman/woman in town, we will be wrong. See you guys on Friday! 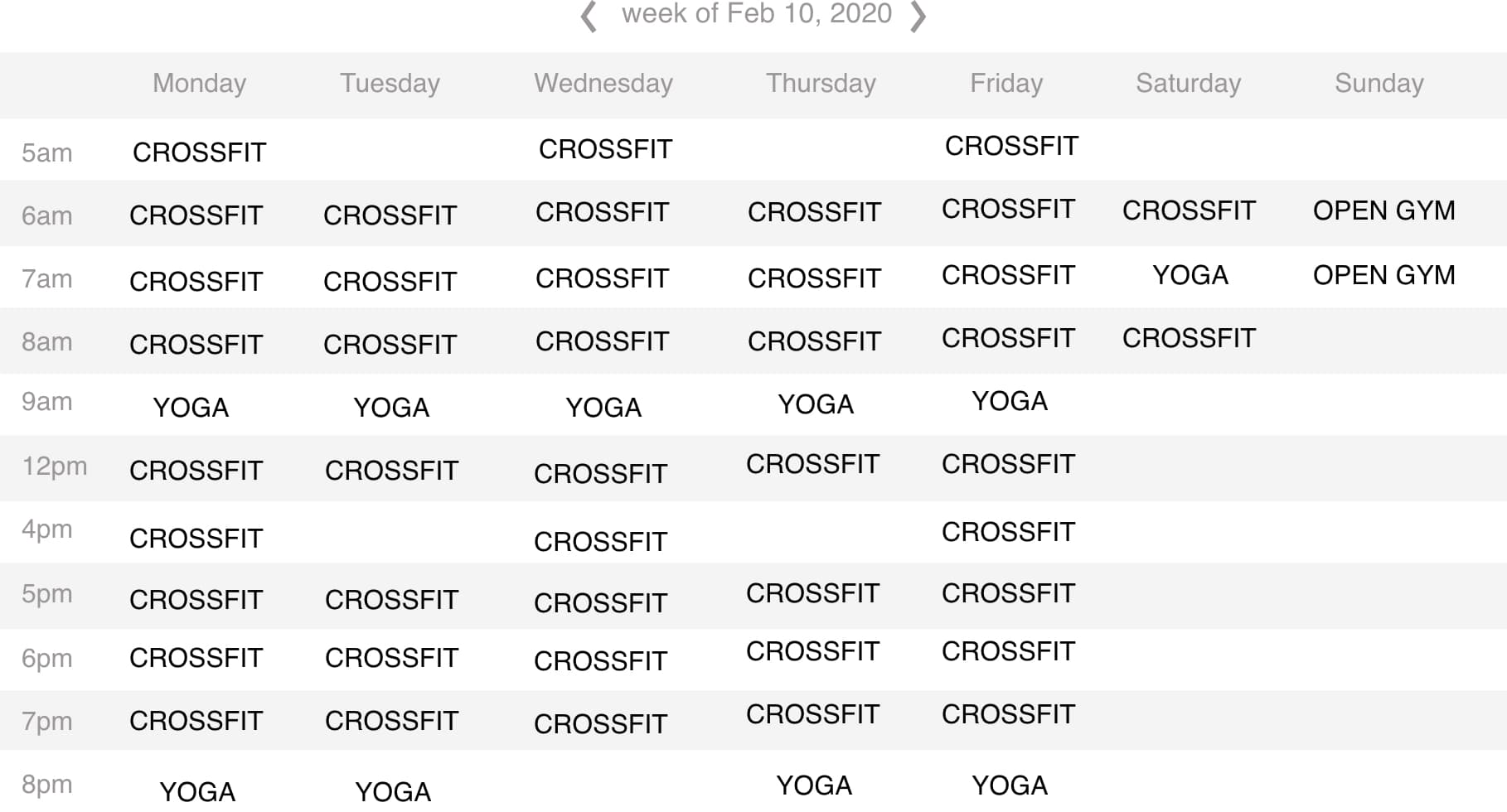 Our classes combine cardio with strength training in a variety of ways. No matter how frequently you attend, you won’t feel like you’re doing the same exercises again and again. These high-intensity classes are an hour long.

Although yoga may seem contrary to the high intensity of our group classes, our classes perfectly complement your other workout experiences improving your flexibility. We have experienced instructors to guide you through lessons.

We offer membership options starting at just $199 a month. Learn more about our pricing options by clicking the button.
learn more

Not sure if RTC Fitness is right for you?

Book a free intro today so we can learn all about you, your goals and how we can help you reach them

This program is intended for anyone interested in learning more about Olympic Weightlifting, in particular the snatch and the clean & jerk.  The focus here…

According to dictionary.com, “OG” is defined as “a slang term for someone who’s incredibly exceptional, authentic, or ‘old-school.’ It can be earnestly used for a…

Let’s face it…everyone at RTC is nice.  It’s right there in the mission statement, so it’s pretty much expected behavior once you enter the gym. …

Summer is right around the corner, which means running season is upon us! Running is often overlooked as an area to practice mechanics and technique…

Week 3 of the Open delivered the movements we knew were coming in a completely unprecedented way; barbell thrusters & ALL the gymnastics PLUS some…

Week 1 started off fun, with the with the second consecutive year to debut the wall climb as the first movement of the first open…

Good journalism requires that the writer remain objective (and let’s be clear…these member highlights are serious journalism), but that was a difficult task with this…

What supplements should I be taking?

Have you ever walked into a supplement store and the salesperson tries to sell you everything on the shelves? They spit buzzwords at you like…

It’s that time of year when Santa is reviewing his list and deciding who’s been naughty and who’s been nice, and it’s safe to say…

“Is Your Healthy Lifestyle Actually Healthy?”

By Steph Irwin, RTC Fitness Co. We live in a culture obsessed with thinness at all costs, a culture that equates a number on the…

They make quite a pair.  And we’re not just talking about a cool pair of shoes, a coordinating pair of socks, or a colorful pair…

THE FIVE PILLARS OF FITNESS

By Steph Irwin, RTC Fitness Co. Any busy parent is familiar with this typical morning scenario:  After spending an hour or so haggling with the…

If you look up the term “fitness bully” in the dictionary, you might find Sara Dye’s name in the definition.  Of course, everyone at RTC…

THE PURPOSE OF HEAVY DAYS

With today in mind (being a heavy day) we wanted to discuss the purpose of heavy days, how to approach them, and why it’s important…

MECHANICS-CONSISTENCY-INTENSITY, AND THE IMPORTANCE OF PRESERVING THE STIMULUS

When a gymnast learns a new skill, she doesn’t just throw it into her competition-ready routine. And before you get all up in arms about gender…

Stark County’s Only PRIVATE Contrast Therapy Suite is HERE and opening in September! Are you ready to Take the Plunge? Our exciting new contrast therapy program…

If you see a flash of fluorescent blue, pink, orange, or yellow flying around the gym at high speed, don’t be alarmed.  It’s not a…

For someone who describes herself as “never really a gym kind of girl,” Megan Geis sure seems to know her way around one.  Megan will…

Dads are ordinary men turned into heroes. Today is Father’s Day – and to honor and champion our everyday HERO dads, we asked our RTC…

The farmer’s walk is about as simple as an exercise/movement can get. That being said, the benefits of this movement are anything but simple. Strengthen…

May we know them. May we be them.May we raise them.  Today is Mother’s Day – and to honor, support, empower, and champion our strong…

Why I Broke Up With My Gym

“I broke up with my gym. We just weren’t working out anymore.” Bad jokes aside, most of us have a very strong relationship with our favorite…

The chalk dust has settled and the bright lights of Friday night have dimmed, but oh what an IMPACT the 2021 CrossFit Open has made…

Week 3 of the Open delivered the movements we knew were coming in a completely unprecedented way; barbell thrusters & ALL the gymnastics PLUS, for…

Now I won’t say that I nailed my week 2 prediction, but come on man……it was CLOSE! We saw a repeat WOD from 2017 that…

Week 1 started off with quite the bang that no one saw coming, with the first ever workout released in the Open that had wall…

“Happiness is not a destination.  It is a method of life.” – Burton Hills If you’re a member of the RTC Fit Fam, then you know…

The Ultimate Guide to the 2021 CrossFit Open in North Canton, OHIO

2021 RTC FITNESS INTRAMURAL OPEN DISCLAIMER: The Intramural Open is an opportunity to assess your fitness capabilities in a fun, slightly different environment than you…

The Hidden Benefits of Olympic Lifting

Snatches and clean and jerks — the two main Olympic lifts — are full-body, intense movements that have the power to strengthen your legs, glutes, back, abs,…

The Power of the Partner Workout

If you’re new to the Crossfit community you may have asked yourself, “What the heck is a partner WOD?”  You’re not alone.  The Partner Workout…

Your Health is YOUR RESPONSIBILITY

Stretch Your Breath to Maximize Your Performance Carbon Dioxide is the metabolic stress messenger of the human body.  Your body is constantly predicting how much…

We’re hard on our hands. With pull-ups, toes to bar, all the barbell work, rope climbs, there’s plenty of opportunities for hand tears. Old school…

Even the most cynical Valentine’s Day hater has to appreciate a good love story.  There’s something sweet and magical about two people who have found…

Exercising at home? What you need to know & how to do it!

It’s January and it’s darn cold! The days are shorter and nights are longer. The ground is frozen. That’s right, it’s winter in NEO.  In…

5 Keys to Working Out Smarter

How to Get Back on Track after the Holidays

Here is a reality check for you….right now I am fluffy.  To be completely transparent I am about 13lbs heavier than where I would like…

At 22, Logan Copeland has the energy and mischievous nature of a little boy.  This makes him lots of fun to be around during a…

They say it’s the quiet ones that you have to watch.  RTC member Kevin Jones just might be one of those people.  He describes himself…

It’s fitting that Jenna Swihart is our first official featured member in the new “Clocking Time With…” highlight series. She just celebrated her 5 year…

CALL IT A COMEBACK

HOW TO GET BACK IN THE ROUTINE AFTER TIME OFF Comeback stories make the most inspirational, memorable, stories. And the truth is that most great…

What Makes The Workout Work?

When I first started CrossFit back in 2011, I thought I HAD to do the workouts as written on the whiteboard, so much so that…

We preach “strict before kipping” a lot, but I thought you should hear it from the FATHER of CrossFit himself… Greg Glassman Says Strict Pull-Ups…

Another CrossFit Open season has come and gone, and what a party it was!  Not only did the RTC Fit Fam witness amazing feats of…

Talk with a coach about your goals, get the plan to achieve them.
LET’S DO THIS